As shown in the figure, the red arrow refers to the place where the LED light is hidden. The warm white light is made by it. This is “seeing the light without seeing the light”! The lamp belt is generally installed in the dark groove, which can make the space highlight the sense of layering and increase the artistic conception!

1. About the LED light zone

As shown in the figure below, this is the true face of the LED lamp belt, just like a strap, plus the LED light source (about LED light source, no longer repeated), as the name suggests, it is called the LED light belt, directly connect to the 220V city city. The electricity can be turned on, fixed with a fixed card, it is not difficult to use. 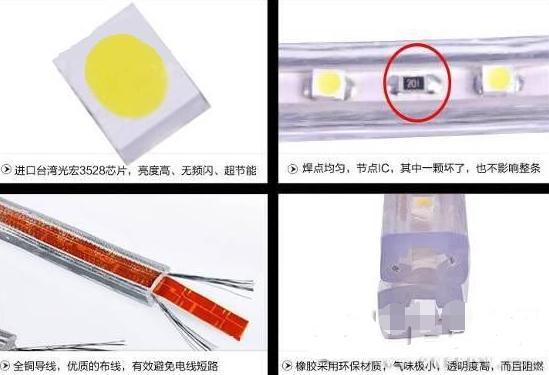 The LED light zone was born in recent years. With the development of LED technology, when there is no LED lamp belt, T4 and T5 lamps are used for backlight, but the minimum size of the T4 and T5 lamps is 0.3 meters. This is It means that if there is less than 0.3 meters, it will leave a dark area, and the LED light belt will lightly glow, and it can be cut according to the actual length, which is very convenient. Waiting for so many light color to choose from, and even colorful changes, now basically rarely tube T4 and T5, and change it to the LED lights!

2. The luminous color of the LED light belt Regarding power consumption, this involves the issue of electricity bills, many users are very concerned about this issue. The rated power of 3528 lamp beads is 0.06W (0.02a*3V = 0.06W), while the rated power of 5050 is 0.18W (0.02a*3V*3 = 0.18W), because the protection resistance will be added to the circuit, so Come down, press 60 lights/meters, and the power consumption of the one -meter 3528 light is about 4W, and the one -meter 5050 lamp belt is about 12W. If it is installed with tens of meters, the power consumption gap is still very large. However, the lamp belt is mainly used to light up the lamp grooves, and the decorative characteristics are mostly. Therefore, it takes into account factors such as power consumption and price. The LED light belt of 3528 60 lights per meter is used most.

② The LED light belt is generally 100 meters per volume. When buying, you should tell the seller in advance according to the length you need. There are several paragraphs in the family, each section is equipped with a connector, and the socket is just plugged in. If you want to cut it yourself, you need to pay attention. The lamp belt generally indicates a special scissors. Cut it on the scissors and connect it. Remember: Be sure to cut it according to the instructions, otherwise it will cause it!

According to the actual length of the lamp tank at home, the assembly, the test, and then you can install it, fix it with a clip of the lights, and finally the power supply is turned on, and the light band is on. If you don’t want to install it yourself, you can hand it in.

6. About quality and safety

The LED lamp belt is generally high -voltage 220V, so it is wrapped with a thick layer of flame retardant glue. The wires, circuit boards, etc. are generally used by copper. , You must not choose the quality of the quality because the price is cheap, and it is cheap for a while. It may be in exchange for hidden safety hazards! Of course, it is not ruled out that it can be found to be good and cheap, but this opportunity is not dropped out of thin air!

From the network pick.